Many parents would probably say they don’t have anything to worry about when it comes to their teen and sexting, the exchange of sexually explicit messages and photos via SMS, or texting.

But most of those parents would be wrong.

According to a report by Drexel University, more than 50% of surveyed students said that they sexted as minors.

Parents can no longer look the other way when it comes to sexting. They need to accept the growing rise in sexting and have conversations with their teens (and preteens) about the potential consequences of sexting.

Sexting Can Be Considered Child Pornography

Child pornography is a term that will likely scare and repulse most teens. But those same teens probably have no idea that sexting, as in receiving and sharing illicit images of minors, can be legally categorized as child pornography.

The Drexel study showed that many teens are unaware of this association and found that 61% of respondents didn’t know that sexting was considered child pornography.

But sexting is connected to child pornography and can lead to legal repercussions as twelve teens in Chicago found out. A group of male students aged 15 and 16 were taken into custody after it was learned that they were distributing nude images of others under the age of 18.

Relationships May End, But Images Will Remain

It isn’t uncommon for teenagers in relationships to believe that their relationship will last forever and fail to think the possibility of it ever ending. So, when they are about to send an explicit message or photo to their boyfriend or girlfriend, they rarely think about what will happen to that message if they break up.

Parents need to have conversations with their teens about the reality of their relationships and remind them to think about what will happen if the relationships ends.

Teens need to be reminded that if they share sexual photos with their boyfriend or girlfriend, that photo will remain even if the relationship ends.

When teens send a text, social media post, or sext, they often aren’t thinking about the long-term life of their message.

They send a message to a specific person and believe that is their only audience. They usually don’t think about the possibility of the message being shared or stolen without their knowledge.

But any piece of digital material has the potential of being shared without consent.

Teens may think that they are safe using platforms like Snapchat, where images are deleted after an allotted amount of time.

But even these sites and platforms are not safe. Last year, MamaBear covered a situation where 13GB of photos and videos on SnapChat were stolen by hackers.

Images that teens thought were private were stolen and shared without the creator’s’ knowledge.

The Cost of a Damaged Reputation

Whether images from sexting are stolen, intentionally misused, or just remain on a social media site on the Internet,  the ultimate danger is a permanent consequence linked to a damaged reputation.

When a college entrance committee, a prospective employer, or anyone else that may be in a position to make a decision affecting your child’s future can find  messages and photos as they search your child’s name across the web they are more and more likely to say “no,” often before even considering the actual school or job application. Many colleges are now running software to scan the Internet for content linked to potential new students. Imagine 4 years of hard work in high school to achieve grades and test scores high enough to apply to the best schools, only to be denied because of a few stray sexting messages.

Related: How To Talk to Your Kids About Their Digital Reputation

Parents can no longer avoid and ignore teen sexting.

They need to have conversations with their teens to help them clearly see the potential consequences that can come from sexting and sharing inappropriate and illicit messages. Parents can also get more involved with their child’s digital world by using MamaBear, The Ultimate Parenting App™. The free app, available for iPhones and Androids, sends parents notifications regarding their child’s social media activity and account, keeping them in the loop of their child’s social media habits and digital life. 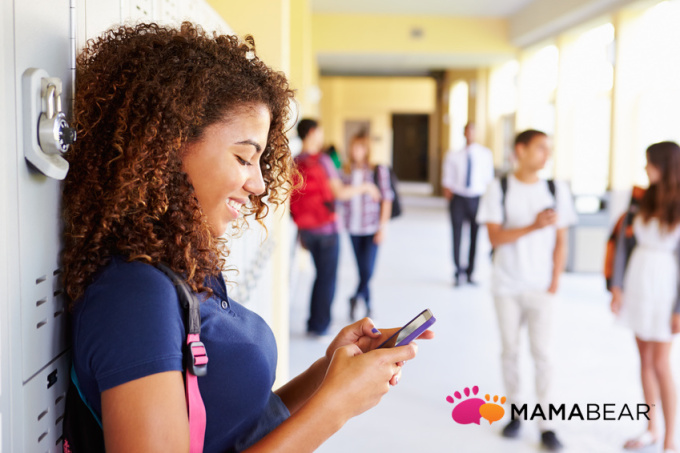 With texting, email, social media and smartphones, teens have endless options for communicating. As parents, it is our responsibility to monitor for safety. But it’s not always easy to stay in the loop when we can’t decipher what our kids are saying with slang and acronyms.

Teens frequently use internet slang and acronyms in their digital conversations. While mostly the language is harmless and easy to decode (such as LOL aka laugh out loud), other times the language is used as an intentional way to hide information from parents and adults.

Not surprisingly, the messages that kids are trying to hide are messages that would be troubling for parents to read. Many of the acronyms refer to drinking and drugs, and the code language is frequently used to hide messages related to sexting.

Many parents think sexting sounds like something their child wouldn’t do. But studies have found that sexting is much more common than many parents want to admit. Studies from The Pew Internet & American Life Project and the Cox Communications Teen Online & Wireless Safety Survey conclude that 39% of teens have sent sexually suggestive messages via text, email or instant messaging.

Parents may believe that their kids aren’t sexting, but it could be that parents just don’t know how to read the language they use to discuss it. In order to crack the code on teenage digital slang, parents need to be familiar with the following acronyms.

Acronyms You Need to Know

Knowing the acronyms is only half the battle when trying to protect your kids. Parents need to connect with their children in their digital worlds by monitoring their social media profiles.

The MamaBear Family Safety App makes it easy for parents to stay in the know. The app allows parents to sync with their kids’ accounts, receive updates when their child makes a new social connection, upload photos and monitor messages with a restricted words list. Add these acronyms to your word list to monitor in MamaBear and take an extra precaution to protect your children. The MamaBear Family Safety App is free and available for both iPhones and Androids. 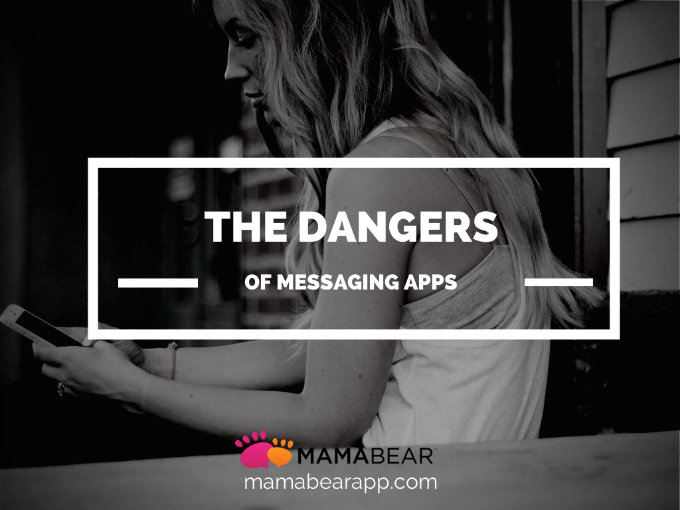 In a recent MamaBear Blog post, we identified some of the top messaging apps. Most parents are aware of the prominence of social messaging apps and the way they have captivated tweens. While messaging apps can be harmless in most cases, it is important for parents to not only stay in the know about which apps are being used but also to monitor them as closely as possible to ensure their children’s safety.

The Dangers of Messaging Apps

While kids may simply be using messaging apps like Kik and SnapChat to share trivial messages and a range of goofy emoticons with their school friends, there are some hidden dangers associated with messaging app use that would strike fear into the heart of any parent.

According to this Fox 4 article, in one week the app Kik was linked to three serious crimes involving teen victims in Southwest Florida. The apps are being used by predators to prey on young victims as well as by kids engaging in sexting and cyberbullying.

Parents should take note. Most kids who have smartphones use these apps on a daily basis and throughout the day and night. Originally designed for much older youths, messaging and social media apps have been usurped by young kids who lack the maturity to understand how much damage they can do.

See this article for an interesting perspective on what happens when apps designed for more mature college students fall into the hands of tweens:

More alarming is the way different social apps are being used together by young kids in dangerous ways. For example, one blogger describes how the photo sharing social network Instagram and the messaging app Kik were used together to allow a pedophile to target a young teenager.

What can parents do?

First, talk to your kids. Without taking too prying of a tone, ask them questions about the apps they use most. Try to make the questions positive, rather than negative, in order to get a foot in the door with kids reluctant to share. What are their favorite messaging apps? Who do they like to talk to? Have they made any new friends? Asking questions but keeping the dialog light and conversational can build trust and help kids to be more open to sharing with their parents.

Second, install a family safety app like MamaBear on all family members’ phones so that you can monitor your kids’ behavior on social media like Instagram and Twitter. This way you will know who they are making friends with and be able to keep tabs on any troublesome behaviors.

Third, remind your children to take their own safety seriously. They should be aware of the kinds of things that really do happen with messaging apps and the types of predators who lurk behind deceiving screen names and profile images. It is important for the whole family – parents and children alike – to stay in the know about what these apps should be used for and what can make them go terribly, terribly wrong.

As much as we don’t want to admit it, more and more kids are sexting. According to studies conducted by the National Campaign to Prevent Teen Pregnancy, The Pew Internet & American Life Project and the Cox Communications Teen Online & Wireless Safety Survey, 39 percent of all teens have sent sexually suggestive messages via text, email or instant messaging and 48 percent of teens say they have received such messages.

Naturally, kids don’t want their parents to find out about sexting behavior. So they try to stay one step ahead when it comes to keeping select content hidden from their parents. Part of this is developmentally normal. But sometimes it can lead to trouble – especially when social media apps are involved creating harm to your child’s digital reputation.

Even when parents use family safety apps like MamaBear to monitor their kids’ safety, talking about the consequences to sexting is an ongoing, important conversation. Be aware of new social and messaging apps your kids and their peers are using. Also, do your best to responsibly monitor their text messages.

Take, for example, the popular app Poof. “Another app to keep an eye on is Poof,” writes one blogger. “It’s an app that hides other apps. All your child has to do is open Poof and select which app they want hidden and mom and dad will never know it’s there.”

This video shows how the app works on Apple devices (note the types of sexually themed apps the commentator decides to hide with Poof!).

Poof also makes a texting app that allows text messages to disappear after they’ve been read. “POOF text messages are never stored on servers, and leave no text messaging footprint behind!” reads the app’s description at the Google Play store.

Do your kids’ phones have Poof?  How would you know? So whose responsibility is it to monitor kids when they engage in this behavior? These days, many groups who work with youth are taking action to keep tabs on kids social media behavior, from schools instituting new social media policies to the police, who are known to have their own procedures now for monitoring the social media accounts of local teens. Some might argue that it is the responsibility of the social media companies themselves to keep tabs on what is going on with underage accounts. Others believe it is firmly the responsibility of parents to monitor their kids’ behavior and hold them accountable when they go astray.