You may not be statuesque like Audrina Patridge, dashing like Orlando Bloom or wealthy like Paris Hilton, but a moment of carelessness could put you in one unfortunate category occupied by all three: crime victim.

Patridge, Bloom and Hilton were among the celebrities who had their homes burglarized by the so-called Bling Ring, a group of fame-obsessed Hollywood teens whose crime spree inspired a film that debuted in mid-June. In some of the break-ins, the young burglars cunningly turned their victims’ use of social media against them.

The recent premiere of The Bling Ring has sparked a number of dialogues touching on everything from the empty culture of celebrity and materialism to the alleged sense of entitlement rampant among members of “Generation TMZ.”

How far will young adults go to emulate the flashy lifestyles of the stars they admire? Are famous people grateful for any kind of attention, even if it involves a visit from police detectives?

As a parent, you probably have little interest in wading into a sociological debate. You’re more interested in practicality — namely, finding out what steps your family can take to avoid the home security threats lurking on the Internet.

The Bling Ring had a key accomplice. It has many aliases, but you probably know it as the Internet.

Some of the celebrity victims made themselves easy marks by sharing their whereabouts on social media. Even Paris Hilton, obviously not the most self-aware star in the Hollywood galaxy, has acknowledged the fact that she made herself vulnerable by constantly posting about her activities. Of course, the victims’ habit of leaving their doors unlocked also had something to do with it.

By tweeting about their plans to attend the latest blockbuster premiere or uploading Instagram photos of themselves (aka “selfies”) at a trendy new club, entertainers are effectively announcing to the online world that their homes are unoccupied. When the Bling Ring saw openings like these, they very often capitalized on them.

Even if you don’t live in a Hollywood mansion, discretion on the Internet matters. Home security experts like Chris Wiley of
Security Choice advise that famous and non-famous alike to refrain from exposing potentially compromising information on social media websites. The list of no-no’s includes:

After all, members of the Bling Ring aren’t the only suspicious characters who troll the Internet looking for information they can use. Most of these crooks would be perfectly happy to target the house of an everyday person like you.

It may not be Hollywood, but it is your home

The loot stolen by the Bling Ring has become nearly as famous as the people they stole it from. Over a period of about one year, the burglars got away with more than $3 million worth of jewelry, designer clothes, luggage, a laptop and more.

Just because your life doesn’t have the same material trappings as those of a celebrity doesn’t mean that you have less to protect — quite the contrary. Anyone with a home and a family has the desire and the obligation to protect it all. The Bling Ring may have been busted, but there are plenty of less-fashionable crooks left to contend with. 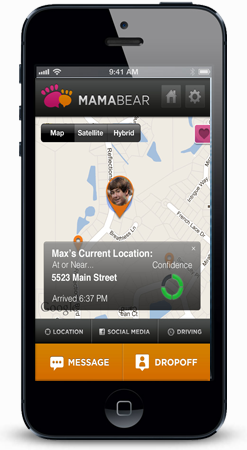 The MamaBear app makes iPhone GPS tracking an extremely powerful solution for modern parents who want a little help with child monitoring. MamaBear combines several key features into an iPhone app that’s both easy to use and easy to understand. MamaBear uses a combination of GPS technologies and iPhone features to give parents an effective set of tools for locating kids in a variety of situations.

The MamaBear GPS location app for iPhone is as simple to use as it is to download and install. With MamaBear, iPhone GPS tracking for your children is an extremely simple process. Once the account has been set up and logged into correctly on the child’s phone, all a parent has to do to locate children is open up the app on an iPhone or web connected iOS device and choose which map option to use on the GPS tracker. It’s a fast, easy and effective tool for child tracking.

MamaBear offers parents a quick solution for parents who want regular updates on the kids’ location. MamaBear can issue parents an alert any time the child leaves a selected location, like school or work, outside of schedule times. The app can also send an alert anytime a child enters an address parents have chosen as restricted. The MamaBear alerts on iPhone are push and email based messages that give parents flexibility on how they want to check in with the app.

MamaBear outshines many other options when it comes to using an iPhone GPS to track kids. Even kids who are in transit are easy to track with MamaBear. We offer parents real time alerts on real driving speeds. Parents can program the app to give them an alert anytime a child exceeds a certain speed. Setting the speeds low can ensure children are not driving at inappropriate times, or are only using surface streets.

Many parents using MamaBear have found the app facilitates children checking in frequently. Some children check in more than they did before the app was installed on their iPhone. Children can use the single button interface on their view of the app to issue parents a GPS tagged alert on their location. This makes checking in fast, easy and unobtrusive for kids. Showing our children the app’s utility as a communication tool makes tracking our kids with an iPhone a bit easier. In addition, parents can do the same and share their location as a push notification to their child at select times.

MamaBear for iPhone makes tracking kids easier in emergency situations. When children are in the proximity of a disaster or other dangers, MamaBear can be invaluable. MamaBear allows parents and kids to find one another quickly in emergencies. MamaBear also enables children to alert parents with a one touch emergency button. This gives kids a simple solution to let parents know they are in a bad situation.

With MamaBear for iPhone, enabling GPS tracking for children is as easy as logging into the app. We designed MamaBear to create dialogs with our families by using the most advanced GPS tools at our disposal. MamaBear allows parents and kids to contact each other quickly and easily in a wide range of ordinary and extraordinary situations.